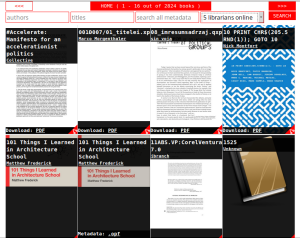 Today we talked about the Web and tracking activities.

Here are some useful links on the topic:

google’s introduction to the internet:
http://www.20thingsilearned.com/en-US/cloud-computing/2

what happens when you visit a url?
http://igoro.com/archive/what-really-happens-when-you-navigate-to-a-url/

An in depth introduction to browsers:
http://www.html5rocks.com/en/tutorials/internals/howbrowserswork/

Ghostery
(Be careful with settings, otherwise Ghostery may colllect and send information about your browsing too)
Adblock
NoScript
TOR (not an extension)
Collusion
A little privacy
ShareMeNot

Finally, you can run your private cloud services at Own cloud.

Hope you had fun, and we look forward to reading your posts on the session!

Diana, Reni, Femke and Seda are part of communities that envision new ways of collaboration or practice using networks. Part of these pursuits entails building alternative tools and reconfiguring networks using open and decentralized solutions, and nurturing a sharp culture of critique of centralized or proprietary services.
In this line of practice, dichotomous thinking may prevail. We may at times even use it to fuel our political/creative/alternative projects e.g., free vs. proprietary in the 90s, and centralized vs. distributed in the age of social media.
Yet, these dichotomies may become passé and even turn unproductive. How can we venture into undoing these dichotomies in order to take a critical look at our work, rethink and re-present its remarkable history, and identify the potentials of our “alternative networks” beyond these dichotomies?

This afternoon is jointly organised with the the Piet Zwart Institute’s Master Media Design and Communication, Ecole de Recherche Graphique, Brussels (The Networked Social ) and Institute of Networkcultures (Unlike Us http://networkcultures.org/wpmu/unlikeus)

Diana McCarty
Diana is a founding member of the radia.fm network of cultural radios, a network of radio stations that support citizen media. they made a content exchange platform between the radio stations, networking their audiences/makers. she can contribute to the question of what makes an “alternative” social network and how you can use existing (social/digital/analog media) to do it.

Reni Hoffmueller
Reni is an artist, she worked on mur.at an project with started with the then novel goal of providing its user base (mostly artists) with free web services. that was the alternative platform of 20 years ago, before “free” services took over. nevertheless, mur.at exists. what does it mean for your vision to get hi-jacked? and, how do you sustain your alternative social networks? are questions that she can talk about extremely well.

Seda Guerses
is a researcher working in the group COSIC/ESAT at the Department of Electrical Engineering in K. U. Leuven, Belgium. She is interested in the topics of privacy technologies, participatory design, feminist critique of computer science, and online social networks. Seda is particularly excited about the topic of anonymity in technical as well as cultural contexts, the spectrum being anywhere between anonymous communications and anonymous folk songs. Beyond her academic work, she also had the pleasure of collaborating with artistic initiatives including Constant vzw, Bootlab, De-center, ESC in Brussels, Graz and Berlin. http://www.esat.kuleuven.be/~sguerses

Femke Snelting
Femke Snelting is an artist and designer, developing projects at the intersection of design, feminism and free software. She is a core member of the Brussels based association for arts and media, Constant. Femke co-initiated the design- and research team Open Source Publishing (OSP) and formed De Geuzen (a foundation for multi-visual research) with Renée Turner and Riek Sijbring. Currently she coordinates the Libre Graphics Research Unit, a partnership of four European medialabs to investigate interrelations between tools and practice. http://snelting.domainepublic.net/