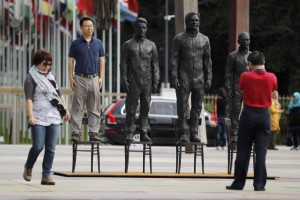 People take pictures with the installation “Anything to Say?”, a bronze sculpture representing whistleblowers Edward Snowden, Julian Assange and Chelsea Manning on the Place des Nations in front of the United Nations European headquarters in Geneva, Switzerland September 14, 2015. According to a press release the work, which weighs more than a ton, is a testimony in favour of freedom of expression and information, without any political controversy. REUTERS/Pierre Albouy

Discussion on Nettime, see the Nettime-l archives, sept. 2015, thread ‘Speak out with”